Turning Inflation to Your Advantage

Thinking about inflation usually evokes anxieties about interest rates, a higher cost of living, becoming worse-off or general uncertainty about the future.  These are all valid concerns but with economics and investments, one can often find beneficiaries amongst all the uncertainty. Most of the time, investors can turn pain into gain. Providing inflation doesn’t morph into hyper-inflation, the list of beneficiaries is plentiful. We’ll explore the list later but first it’s helpful to consider the reality of inflation data.

When thinking about the concept of inflation, I find it useful to subdivide it into three different variations.

1. The Official Rate. I label this as the “pretend rate” – i.e. what the government likes us to believe. Don’t fall for it! The official rate (shown in the chart below) is unlikely to reflect anyone’s true rate of inflation. It’s also backward-looking: the current official CPI rate of 3.1% measures prices for a basket of goods and services in October 2021 compared to October 2020. So not only is it vastly under-egged, it uses old data. 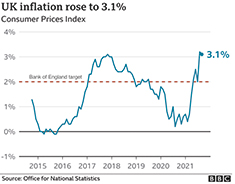 2. The Central Bank Rate. This is slightly more meaningful as it’s forward looking and, more importantly, impacts future interest rate decisions. Central Banks like the Bank of England forecast around 12-24 months out, to model how inflation might evolve in the future. The Bank of England currently expects inflation to rise towards 4% before subsiding. Interestingly, the Bank’s chief economist Huw Pill, appears to disagree with his employer’s official forecast and believes the rate will peak higher at 5%.

Investors need not panic about interest rates though. Central banks around the world remain of the general belief that this spike is of a transitory nature due to Covid-related supply chain issues. As such, they appear relaxed – for now - about needing to materially or imminently raise rates (more on that later).

3. The REALITY rate (for investors). As investors we are saving for the future – deferring today’s consumption for our future spending. As such, we should be concerned about the purchasing power of our money in the future. For this we need to be aware of a TRUE measure of inflation. I have often argued this to be much higher than the official rate – quite possibly at high single-digit levels, 7-10% perhaps.

We have published several articles on real estate investment trusts (REITs) in PIN before,...

A Selective Licensing scheme that charges Nottingham landlords up to £890 a year for...