It’s All About The Numbers

I have lost count of late of the number of sensationalist headlines in national newspapers and other media proclaiming that ‘Buy to Let is Dead’, often from individuals or an organisation with a contrary vested interest. Of course it (BTL) is now a more complex investing model for many than it was around four or so years ago, prior to the government’s decision to introduce various tax and lending changes in favour of first time buyers.

Many property investors and landlords, with their rental portfolios in their own names, have changed tack by either incorporating, selling part of their stock to de-leverage or by pursuing strategies to generate more net income, such as HMOs. Quite a few people have also turned towards property development or commercial property investing as an alternative, but some have recently discovered that the grass is not always greener in new pastures.

So bearing the above in mind, it was quite refreshing to meet up with west Midlands-based Adam Lawrence and to learn how and why he has created a residential portfolio based on a fairly standard ‘vanilla’ buy-to-let model, which some people have turned completely away from in the last two years.

“Last year we acquired around 60 residential properties and although it’s been a slower start this year, we have managed to acquire 12 more to-date.”

My immediate assumption was that Adam was a serial property trader, but that is not the case as, although he admits to doing an occasional ‘flip deal’, his primary approach is to buy and rent for the long term. Given his fairly prodigious acquisition rate, it will come as no surprise to learn that Adam is not acquiring property in his personal name and is using SPV’s and corporate entities to hold the rental properties.

“I worked in financial services in Switzerland for a few years and with one of the top 10 lenders in the UK. But I came into property having built up a sports betting/trading business, which initially was a sideline activity,” says Adam. “For a while it was very profitable and was very ‘maths driven’, low risk and with a technology led approach. This was in the early 2000’s but of course the Internet has evolved massively since that time.

Landlord
UK Landlords Spend £4.7bn a Year on Their Rental Properties
by - 5 Aug 2019

Landlords in the UK are spending nearly £4.7bn a year on their rental properties, an...

Ten years ago in 2002 the West was still reeling from the aftermath of the September 11th... 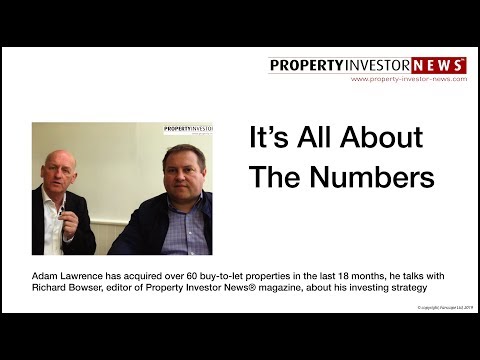 It’s All About The Numbers

Receive your own regular monthly copy.